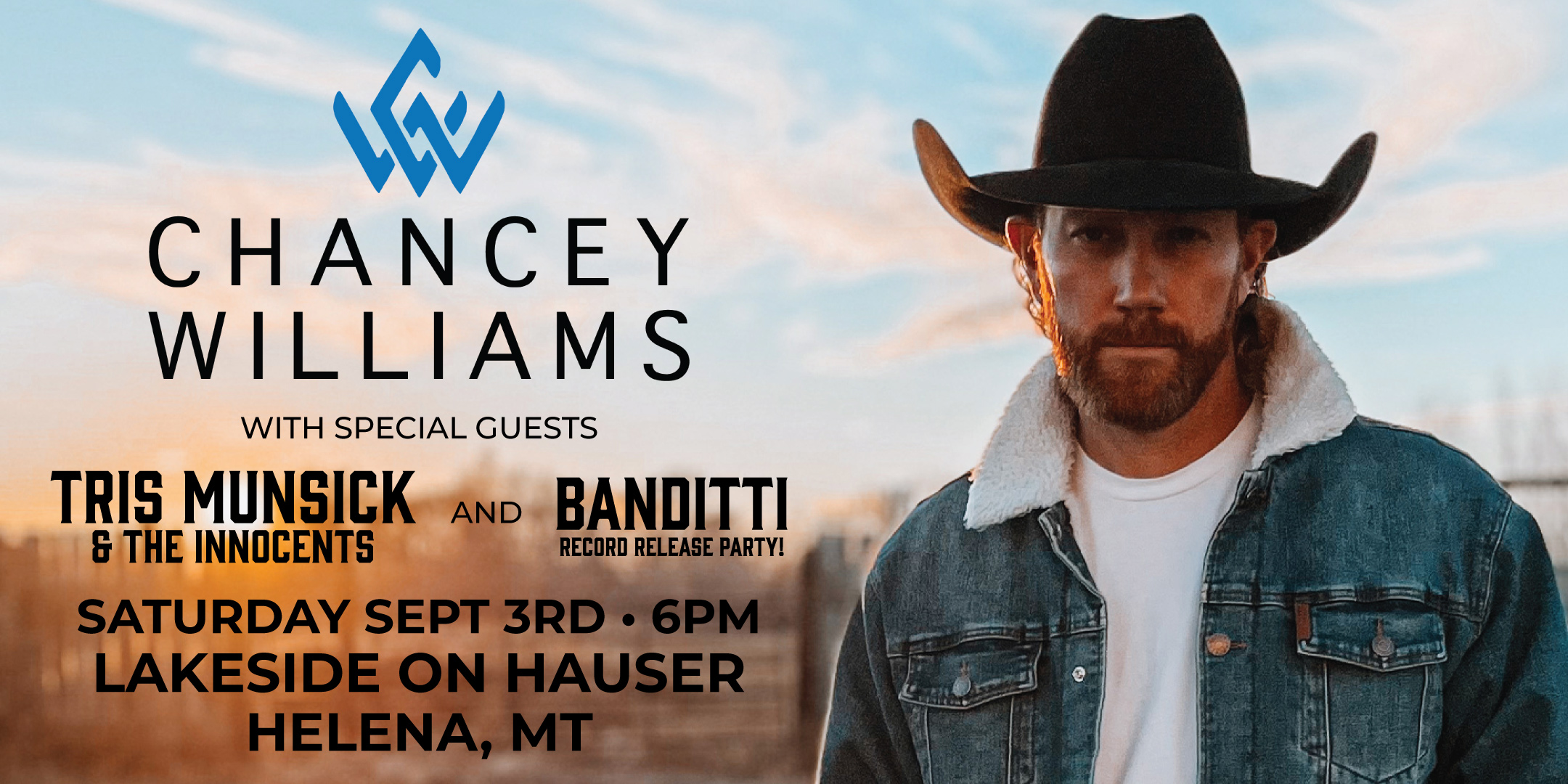 Saddle Bronc athlete turned neo-traditional country music sensation, Chancey Williams, has gone from competing on horseback to performing on center stage.
As one of only two artists (Chris LeDoux) to both compete in the rodeo and perform on the main stage at Cheyenne Frontier Days and the only singer/songwriter to be endorsed by CINCH®, Williams is the next authentic cowboy of country music.

Growing up on a ranch in the northeastern corner of Wyoming, Williams is one of the proud few hailing from Moorcroft, WY – a town so small it doesn’t need stoplights. Rodeo, wrestling, and academic talents took him first to Casper College and then to the University of Wyoming. Chancey earned several degrees, including a Master’s in Public Administration, but it was music and the camaraderie of the road that continues to take him all over the United States.

2021 brought a sense of “near normalcy” back on the road in many areas of the country. Chancey finished out last year with a tour sponsored by CINCH, a series of dates with Toby Keith, a sold-out show with Cody Johnson at the Ryman Auditorium, and an especially memorable concert as direct support for one of his idols, Alan Jackson. The National Finals Rodeo returned to Las Vegas and Chancey headlined the main showroom at South Point, “ground zero” at the most important rodeo event in the world.

Beginning 2022, Chancey was named iHeartRadio’s 2022 Rocky Mountain Country Music Awards Entertainer of the Year. Williams also won Songwriter of the Year for ‘The Saint’ and Album of the Year for his most recent record produced with country hitmaker, Trent Wilmon, 3rd Street. Recently, The WME Artist has also inked a new development deal with radio programming legend John Marks, who also led Sirius/XM “The Highway,” and then the Nashville office at Spotify.

ABOUT TRIS MUNSICK & THE INNOCENTS

As a top act in the region, Tris Munsick & the Innocents continue to climb sharing their brand of Western country with audiences near and far. They have broken the mold with their unique blend of traditional and modern country, and fans resonate deeply with the authenticity ever-present in their music. In the words of recording artist Chancey Williams, “Tris Munsick is the real deal. He can write about and represent cowboy culture, because he was born in it and lives it. Tris is an artist that is really finding his voice in the American West.”

Constantly on the road, the band has shared the stage with Big and Rich, Lyle Lovett, Blackhawk, the Eli Young Band, Cody Johnson, Casey Donahew, Marty Stuart, and many more as well as performing at the National Finals Rodeo Opening Ceremonies in Las Vegas, NV. In an era that is continually moving towards digital music platforms, Tris Munsick and the Innocents continue to bring their live sound and feel to audiences throughout the American West.

Thrice-nominated for the Rocky Mountain Country Music awards, the band has recorded three albums to date, with their third release “Washakie Wind” hot off the press. Singles “If Horses Had Wings” and “Palomino” have been well-received, and the album is, up til now, a high point in what is sure to be a long and exciting career for this group.

Hailing from the eastern slope of the Big Horn mountains, Tris Munsick & the Innocents shine a brand-new light on modern cowboy music. Exciting things are in the works and for these boys, the ride has just begun.

Banditti is a husband-wife duo (Blake & Kaci) based out of Helena, Montana. Blake grew up in the Flint Creek Valley in western Montana on his family’s ranch. Kaci was born and raised in the high plains country, just outside of Cheyenne, Wyoming. Together they write and play music that harkens back to their western upbringings. Their dynamic harmonies blend together like the love they share for one another. Their songwriting is authentic to the “Cowboy” and “Charlie Russell” country that they were raised in, where its landscapes and people are central to their storytelling. Banditti’s first album “Time Frame” is set to be released on September 3rd. Two singles have been released, to date. “Time Frame” is a song that tells the story of a modern-day couple in love, appreciating the simpler things in life, and dreaming of an era long since passed. “Black Thunder” is the story of a son who follows his father’s footsteps to work in one of the great coal mines of Wyoming, where eventually the industry has left him behind due to the every-changing energy economics and politics of our modern times. The rest of the album will feature songs of everlasting love, honky-tonk heartache, rodeo, and reminiscing about childhood. Banditti currently tours throughout Montana and Wyoming and is excited to share their new music with their family, friends, and fans.